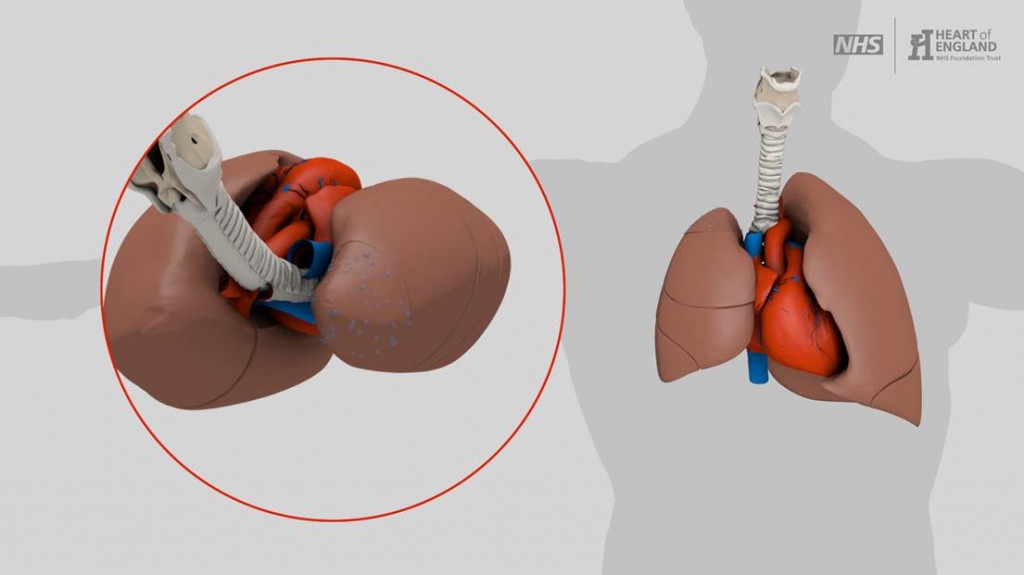 What is a pneumothorax?

When air leaks out of the lung it collapses and leaves a space around it. The medical term for a collapsed lung is a pneumothorax. A small pneumothorax will often heal by itself, however sometimes they don’t heal up or they come back. A chest drain may be used at first but if this fails an operation may be needed to help re-inflate the lung and stop it collapsing again. If you have had a pneumothorax more than once, surgery is intended to help prevent this happening again.

What causes a pneumothorax?
What does the operation involve? 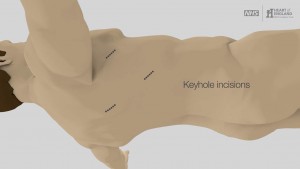 A number of techniques can be used to fix a pneumothorax. There are two parts to the surgery; dealing with area of lung that has leaked and preventing the pneumothorax from coming back. These procedures are done as keyhole (VATS) surgery. VATS stands for Video Assisted Thoracoscopic Surgery.

During surgery you lie on your side with your arm raised. Up to 4 small cuts are made, each about 5cm (2 in) long. These are used for the instruments and small camera to go into the chest. Special staples are used to cut and seal any parts of lung that need to be removed. The piece of lung can be removed through one of the small cuts. The wound is closed with dissolvable stitches. 1 or 2 chest drains are put in at the end of the operation and held in placed with a stitch. These remove any fluid or air from around the lung.

If a part of the operation cannot be done keyhole the operation may need to be changed to the open technique (thoracotomy). Open surgery is done with one longer cut under the shoulder blade between 2 ribs. The 2 ribs are parted to get into the chest. One rib may be cut to give more space, ribs are not removed. At the end of surgery the 2 ribs are held back together with strong stitches. The muscles and skin are also stitched back together.

If you have had repeated episodes of pneumothorax or you wish to do scuba diving your surgeon may decide it is best to use the open technique to do your operation.

What is recovery like?
Recovery in hospital and recovery at home apply to surgery for pneumothorax.

Women affected by catamenial pneumothorax may benefit from hormonal treatment to stop ovulation. This is usually directed by a gynaecologist.

Particular care should be taken if you are considering flying or scuba diving.

Diving without treatment for a pneumothorax is extremely dangerous. Diving causes big changes in the respiratory system and compression of air within the body. If your pneumothorax happened for no reason you should not dive unless you have had surgery on both sides of the chest to prevent a further pneumothorax. After surgery you will need to have normal lung function tests and a normal CT scan of the chest before diving. Guidelines may change. You should have a specialist assessment of your individual fitness for diving prior to doing so. Ask your diving organisation for contact details, some GPs may be able to do assessments but many of them will not have had the training to do so.

What are the risks?
General risks of thoracic surgery apply to surgery for pneumothorax.

In addition the following risks apply:

Recurrence usually happens within a few years of the first pneumothorax but it can happen many years later. It may come back on the other side of the chest.

Air may continue to leak out of the lung after surgery. Occasionally this lasts for longer, possibly weeks. A chest drain will need to be in place until this settles, you may be able to go home with the chest drain still in and come back for regular check-ups until the air leak settles. The risk of this is higher if lung disease caused the pneumothorax.

What are the alternatives to surgery?
It is your choice whether to go ahead with surgery or choose another kind of treatment. We will respect your wishes and support you in choosing the treatment that suits your individual circumstances. You are always welcome to seek a second opinion.

If you do not want an operation other options may include:

Given enough time the lung should heal and stop leaking air, this may take weeks. If you have a lung disease and surgery would be too risky your surgeon may advise you it is safest to wait for the lung to heal. Different types of drains and drain settings may be used to try and help this process.

We can help the lung stick to the chest wall without an operation in some cases. Sterile talc powder is mixed with sterile water and flushed up the chest drain. A small amount of your own blood may also be used instead of the talc and water mixture. This requires a chest drain but does not require you to be asleep under a general anaesthetic. Putting the talc powder in during an operation has a higher success rate than via a drain (95% for surgery vs 75% using the drain).

We use cookies on our website to give you the most relevant experience by remembering your preferences and repeat visits. By clicking “Accept”, you consent to the use of ALL the cookies.
Cookie settingsACCEPT
Manage consent

This website uses cookies to improve your experience while you navigate through the website. Out of these, the cookies that are categorized as necessary are stored on your browser as they are essential for the working of basic functionalities of the website. We also use third-party cookies that help us analyze and understand how you use this website. These cookies will be stored in your browser only with your consent. You also have the option to opt-out of these cookies. But opting out of some of these cookies may affect your browsing experience.
Necessary Always Enabled
Necessary cookies are absolutely essential for the website to function properly. These cookies ensure basic functionalities and security features of the website, anonymously.
Analytics
Analytical cookies are used to understand how visitors interact with the website. These cookies help provide information on metrics the number of visitors, bounce rate, traffic source, etc.
SAVE & ACCEPT